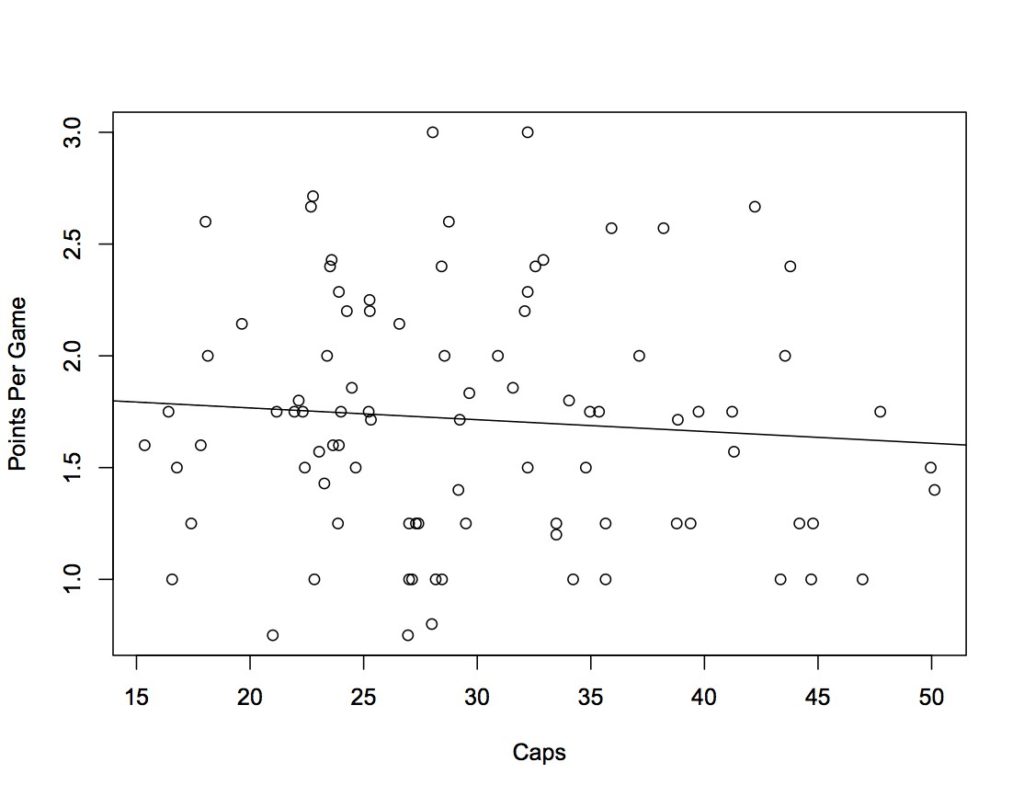 Germany goes into this weekend’s World Cup final against Argentina almost a full three years younger on average. That is a ridiculous spread. Yet, as a team, the Germans are somehow vastly more experienced in the international arena.

How is that possible?

Part of it is how you think about experience. This is sort of a follow-up to a previous post about age and success at the World Cup (where age is used a proxy for experience). The original intention was to use caps as the yardstick before figuring that might be the lesser of two reductionist measures.

Just think through it for a second. Some players break into the national team as teens and become fixtures for a decade-plus regardless of form, while others go until late in their career before anyone bothers to notice they are good. Rickie Lambert didn’t get his first international call up for England until he was 31 (for the sake of comparison Paul Scholes retired from international football at 29).

Still, at age 31 both Lambert and the hypothetical teen will have played plenty of top level club soccer despite having a huge difference in the number of caps, so their experience is probably better captured by age.

Numerically, you can also graph the difference. Below is a plot of Average Age vs. Average Caps for World Cup sides since 19901.

That has a correlation of .378. Not great. Maybe even that’s generous because cases like Lambert’s should be way more the exception than the rule. There is some positive correlation but even just eyeballing the graph it’s not particularly strong. It looks more like a hunting accident Rorschach than a meaningful plot.

But that doesn’t mean caps mightn’t still be a useful measure of something. Again, this 2014 German team is very young but they are extremely experienced on the international stage. Maybe, despite the odd Lambert-like outlier, average caps are a decent predictor of success after all?

Or not. If you made sense of the top graph before even getting this far, you probably figured out that how many caps your teams has on average doesn’t mean much either. At least in terms of points, which is a measure of wins (or draws), which is what you are trying to do in the World Cup2.

Again, visually you can see that is a terrible (or non-existent) relationship. In fact the best-fit line to the data has a negative slope, which implies that having more experienced players (caps) leads to fewer points in the World Cup. That probably only makes sense to England.

And the R-squared of that graph is less than .01 (although curiously, the intercept is significant)3. In simpler terms: The number of caps a national team has says almost nothing about how well that team will do at the World Cup.

But there’s something peculiar about this year’s German team vis a vis Spain’s 2010 World Cup-winning team. Look at these numbers:

Spain were very young for a winning side in 2010. But what they were was experienced (and young). Over the quadrennial from the 2006 to 2010 they managed to collectively pick up lots of caps without the average age of the squad increasing (okay, increasing just the tiniest bit).

Holy cow, Spain finally found the Fountain of Youth. Seems a bit silly to only use it to win a soccer tournament.

What’s clear only in hindsight is that soccer fans probably should have seen Spain coming. In 2006 they went out in the first knock out round at the hands of eventual finalists France. What few people remember is that France struggled to get out of a terrible group in Germany and were maybe outplayed by Spain.

With Spain and France tied at 1-1 in the 79th minute, Jaoquin put a shot into the side netting. Instead of taking a deserved lead, Spain committed some light set-piece defensive crimes and were punished by Patrick Viera at the back post in the 83rd. Spain were left chasing the game. Predictably, they got caught on the counter when pressing for a late equalizer and were saddled with a 3-1 scoreline. Coming to life late in that match might have been the catalyst that got France actually playing something close to final-worthy football. Spain’s tournament was largely forgotten.

It wasn’t until the Euro two years later that Spain became Spain, but the sketches of the Spain to come were there to see. That knock-out elimination by France in ’06 was Spain’s first loss in 25 games.

Entering the final this weekend, Germany looks a bit similar to Spain 4. You don’t even have to squint much to see it. Not only are they young with a ridiculous amount of experience but they added to that experience without getting older. And they are very experienced. While seeing squads with an average 40+ caps per player isn’t unusual, it’s not at all common to see it in squads as young as Germany’s.

Germany has also made the semis of the last World Cup (losing to Spain, the eventual winner in South Africa) and the last Euro. Both were tight 1-goal games, so a bounce here or a whistle there and we might (repeat: might) even be talking about them as one of the all-time sides. We’re not but Germany still go into the final much younger and more experienced than their opponents5.

They also happen to be playing their best football of the tournament at the exact right time.

1 This needs a bit of explanation. The dataset isn’t every team since 1990. First, it’s limited to countries that made it to the knockout stages. One of the reasons for that was to try to get more than just three games when figuring points per game (which is used later). So a minimum of four games is a little better than three when trying to get a number for how well a team did (although both are pretty tiny samples). Plus the worst team out of Asia or CONCACAF is likely to be bad regardless of how many caps their team averages. It’s not really good to just throw out data unless you have a very good reason to do so, but here it’s probably only nominally not good. Second, from the subset of teams to escape their group some of the data was still not available, so they were similarly omitted. For example, in 1990 Argentina made it to the final, but there was no data for the number of caps players had earned entering the tournament, so ‘Argentina 90’ isn’t in the dataset.

2 Three points were given for a win and one for a draw. That includes knockout round games that went to penalties. Technically, those games are actually recorded as draws and penalties are used to determine which team advances. This was also used for the 1990 World Cup teams for consistency (prior to 1994 a win was worth only 2 points).

4 At 28.9 years, the 2014 Argentina squad is the oldest in the tournament. And they have almost no youth. Messi at 26 is the second youngest player on the team (only by a few days but, for comparison, he’s older than all but about 10 players on the German squad). Moreover, for all that age, Argentina only averages 32.22 caps. So they are way older than Germany but significantly less experienced.

5 If you go back another four years you might even be able to convince yourself that the similarities run even deeper. Spain managed to go three World Cups without getting older while managing to accumulate caps (‘experience’)

It’s not as obvious for Germany, but that 2006 side was saddled with a couple of really old goal keepers. If you remove those, the average age drops to 25.4 years. The average number of caps doesn’t come down significantly partly because at the age of 21 Mertesacker, Podolski and Schweinsteiger had 23, 25, and 28 caps respectively. So it’s not really going to show up numerically in the caps, but a youth movement was already underway in ’06 in Germany.

Anyway, winning the World Cup might involve longer term planning as much as having a good seven game stretch. Or rather, it might take both. That is if you don’t happen to have a Lionel Messi in your country’s talent pool.