mbertin
D3, Numbers and stuff, Soccer, Stats
No comments yet 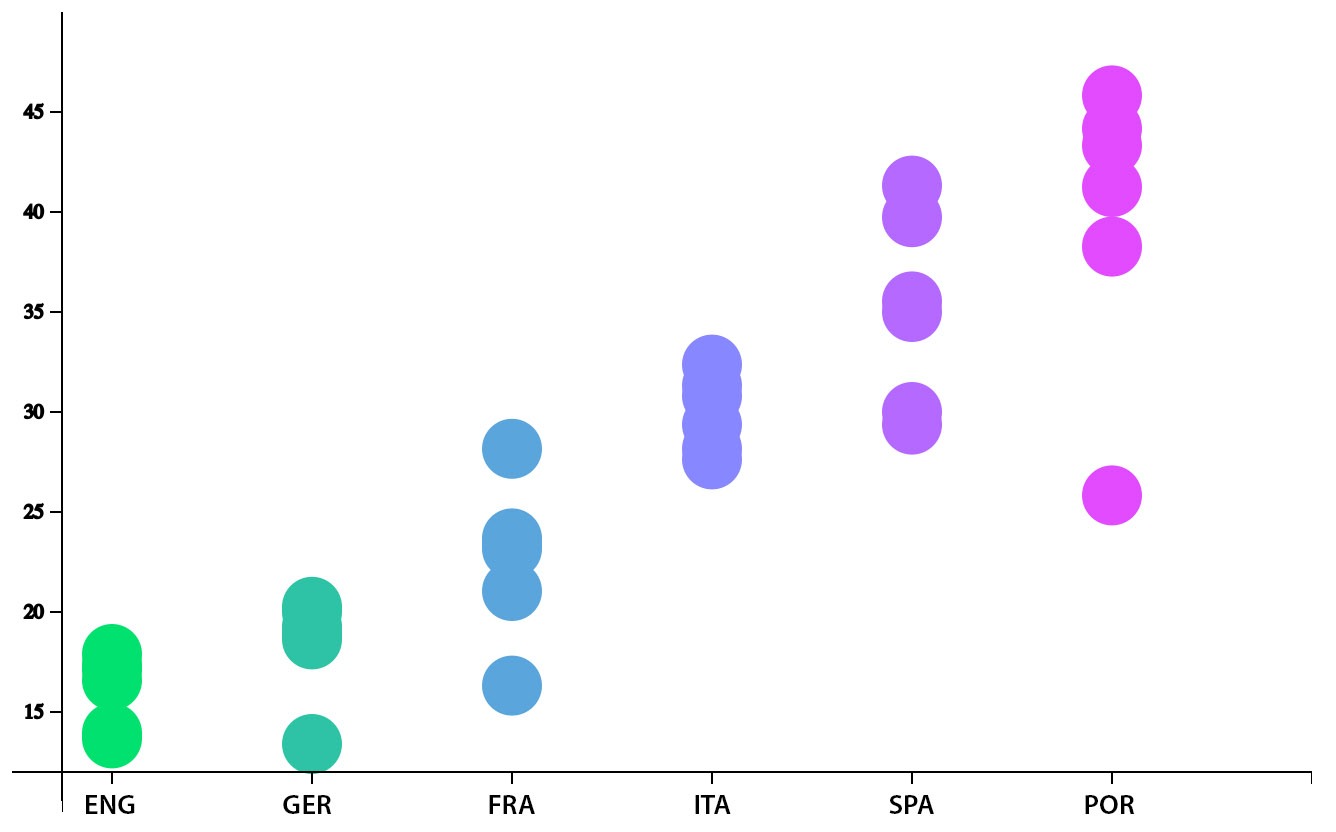 The last 15 minutes of Arsenal’s annual exercise in handicapping themselves with a couple of extra fixtures were a little nervy. That’s mostly because they were only up one goal but suddenly down a man after referee Pedro Proenca sent off Mathieu Debuchy on a second yellow so soft you could sleep on it (the Gunners would hold off Besiktas to advance to the Champions League group stage).

In fact somewhere near the start of the second half Proenca began handing out cards like there were 22 birthdays to celebrate. It hit its apex of silliness when Calum Chambers was carded for coming on too early as a substitute.

But it probably shouldn’t have been too much of a surprise because Proenca is Portuguese and Portuguese officials love showing cards and sending people off.

The above graph is six years of red cards (as a percentage of matches) for the six seasons starting 2008/2009 through 2013/2014 for the top five top European leagues (England, Spain, Germany, Italy, Portugal) plus France. So each country is a column of circles, where each circle is a season, and each season’s y-value is the top division’s red card rate (specifically, total red cards divided by total matches then multiplied by 100).

Two things stand out. First, there is a pretty clear disparity between leagues. In the Prem you’re looking at, on average, one red every six games, give or take. Compare that to Portugal where pretty much everyone is going to get thrown out at some point (better than 2 in 5 games see red).

Second, the numbers are relatively stable for each league. In other words, England is typically right around the 15% mark and Portugal has made itself comfortable in the 40% neighborhood. Yes, six seasons isn’t a ton for gauging historical stability but generally there isn’t a huge amount of variance in a given league (there is only one season that truly looks like an outlier). Even Spain, which looks to be the least stable, still hovers within about plus-minus five percentage points from season to season.

The reason? It could be any number of things: Different styles of play, different expectations by players, low turnover in the officials pool. Just think about England, officials seem loath to give a card early in a match—even a yellow—regardless of how agricultural the foul might be. That fact accounts for 62% of Tony Pulis’ ability to keep Stoke in the top flight. And when someone does get sent off, game commentators will often bemoan how the official has determined the outcome or ruined the game, or some nonsense. Players are rarely at fault, instead refs lose control of a match.

On the other end, in Iberia maybe players are going down more easily because they know officials are prone to give out cards (or they are duping them at a higher rate—not committing to a direction of the causality here, just the possible explanation). So that behavior is reinforced and rewarded.

Still, it’s more than a bit of a curiosity how different the rates are across leagues. A Portuguese referee is more than two times as likely to send off a player than an English or German one. It’s certainly something that a club like Arsenal should be aware of, just in case they happen to end up in a competition where they might have a match official of some nationality besides ‘English.’

Something that only happens, what, annually.