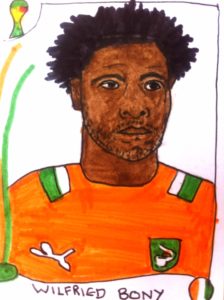 Nothing. He contributed nothing.

Maybe you totally believe that.

Anyway, inspired by this piece at Statsbomb (it’s about whether Swansea can replicate the relative success of their 2014-25 campaign), I started trying to think of some obvious things that might explain what Swansea were doing this past season that had them outperform their expected goals by such a large margin1.

I didn’t come up with anything in terms of style of play or tactics. But Swansea did perform a bit of a natural experiment for us. In January they sold their best striker, Wilfred Bony, to Manchester City. So they played about half the season with Bony, then played the back half the season without him (and it was really the only substantive change they made, unless you think loaning Jazz Richards to Fulham had a significant material impact on the team’s play). You can’t really see the scores in the alternate world where Bony never transfered so, given current metaphysical limitations, it’s damn near perfect test for isolating a single player’s contribution.

What if most of Swansea’s over-performance happened with Bony? Maybe his strike rate was ridiculously good, or his movement off the ball was such that it created space for teammates that had them converting lower probability shots with alarming ease. Then, after Bony left Swansea, everything went back to ‘normal’ and the back half of the season saw the team’s actual goals fall in line with its expected goals. That would be a decent case that Bony by himself was damn near a wizard and we were all somehow missing it numerically (and it wouldn’t have manifested itself for City because they barely played him2).

Yeah, I already spoiled the answer here. Sorry. Bony had almost no effect. In fact, it’s staggering how much nothingness is in the nothing he contributed (or failed to contribute).

So the answer to Swansea’s outlier-ness isn’t ‘Wilfred Bony.’ Would have been a lot cooler if it was, but no, not even close3.

1 The Statsbomb piece has Swansea’s actual-goals-over-expected-goals as 1.1165. I have it as 1.2057, which is a larger over-performance. In other words, Swansea scored more last season than the overall quality of their chances would have predicted by about 20%.

3 We can’t completely disallow the possibility that Bony is still a wizard and that, once he left, the player who took over in his position, Bafetimbi Gomis, was almost his statistical twin. That would mean that the Swans had two wizards on their roster last season. So that’s probably unlikely. Also, the author of the Statsbomb piece does allude to the fact that Bony left midseason, I figured I’d go ahead and do the calculations.

Also, thanks to the nice folks at Panini Cheapskates for use of the nifty pic.

You can leave a reply or Trackback this post.