mbertin
Numbers and stuff
No comments yet 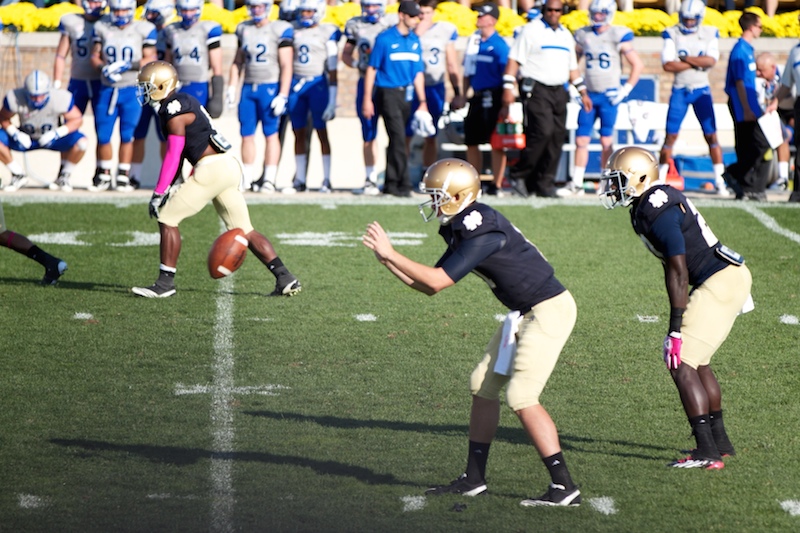 Darren Rovell is annoying. For a myriad of reasons, I’m sure. For current purposes he’s annoying because, as a sports business reporter, he can’t seem to do basic business or financial calculations (although, maybe his editorial overlords don’t even want him to).

He put up a list yesterday of the worst dead money contracts in sports. The problem is they were all in nominal dollars. Take a basic finance class and one of the first things you learn is that money today is worth more than the same money tomorrow1. If that doesn’t register conceptually, just know it’s why your father complains that in his day movies cost $1 and everything was generally better.

Evaluating a 15-year-old contract buyout without adjusting for inflation (or a payment stream 20 years into the future without factoring in the discount rate) will throw off the value by about 30%. This is particularly problematic for Rovell because, as a blind squirrel, his nut-finding chances probably decrease even further by not at least ballparking for inflation or interest.

Anyway, take the same list and adjust to 2015 dollars and, cumulatively, the values change by about $70M. Below is the same list after said adjustment. The first number after the player’s name is the updated value in 2015 money; the number in parenthesis at the end is Rovell’s. The comments in between are mine. I can’t believe I spent as much time as I did on this.

20) JaMarcus Russell: $3.18M. Russell has no business being on this list. He was a terrible NFL quarterback and, for what they paid him in salary, the Raiders got almost no value in terms of on-field production. But for what it cost to make him go away (especially if they indeed owed him three times that)? I bet a quarter of the NBA teams have as much dead money on their rosters right now2.

19) Bobby Bonilla: $24M. By the time Bonilla gets his last check from the Mets, it’ll be worth close to half what’s printed on it in today’s dollars. The Bonilla deal is the one where not adjusting is really problematic because he left the game fifteen years ago, and his deal goes to 2035. The $5.9 the Mets could have paid Bonilla in 2000? That’s about $9.2M today. And the total value in 2015 money of the annual $1.19M payments (including those already made) is about $24M. So this is not a good deal (well, it is for Bonilla), but it’s not the dumbest deal ever. Although it is funny. And it is fun to laugh at the Mets for being Metsy.

16) Bo Pellini: $4.6M. This is actually my favorite entry here despite it being one of the smaller amounts. Pellini will get monthly installments of $128,009 from Nebraska until February 2019. That’s monthly. So looking at, say, Deron Williams above, a $2M difference doesn’t feel like much on a ~$25M chunk of change. The way Pellini’s buyout gets paid—a monthly six figure check—makes it seem a little more gaudy. Eighty percent of households in the US work pretty hard and don’t bring down six figures in a year. Pellini is getting that monthly for doing nothing.

14) Alexi Yahsin: $23.1M. There is some wiggle room here and I’m not sure how the annual distributions were structured. Some had it straight line, other sources hinted the amounts varied. Still, Rovell is off here by over 30%.

13) Denny Crum: $6.7M. From what I can find he was paid a 15 year salary (or possibly 20 depending on the source) at $338,000 per year. That was accompanied by a $2M buyout per the terms of his contract. So the PV of the salary and buyout is $6.7M, that’s if you assume the entire buyout was paid out as a lump sum the year he retired (not a safe assumption). If there was another $5M consulting agreement on top of that—and Rovell’s original ESPN post refers to a consulting agreement but not a salary—this could conceivably run close double the $7M figure Rovell has. If the consulting fee is actually the 15-year salary, this one is pretty close.

11) Junior Galette: $29.7M. What am I missing here? Since the bulk of the cap hit is next year, it comes down a little bit. So the total is about $17.2M. But they paid him a roster bonus of $12.5M in March. Shouldn’t that be part of the total? Granted it doesn’t count against the cap, but it’s money the Saints paid to a player who isn’t playing for them.

11) Will Muschamp: $6.1M. But he gets his Auburn salary without a reduction in the money Florida owes him. Still no money to pay the actual athletes at either school, though.

10) Josh Smith: $35.5M. First assume they paid him the $10M for last season. There are payments on the books for $5.4M through the ’19-’20 season. If he was really owed just $25M more for the next two years, whoever structured his buyout did a good job because the present value is this was actually $35.5M. So he won’t take much of a hit by stretching the payments out.

7) Jerome Williams: $27.3M. Was this structured the same way as Michael Finley’s deal (it happened under the same one-time amnesty rules)? In that case Williams is $27.3M in today’s money.

4) Rick DiPietro: $19.9M. Not bad considering the Islanders were on the hook for $36M in salary had he played out his contract.

3) Gilbert Arenas. I skipped. Not intentionally but when I went back to number the list I realized I was one short. And this has already been a big enough waste of time to make a point that didn’t require this much time. Still, because Gil’s payout spans a couplathree years on either side of now, it won’t be much different from the figure in the ESPN piece (assuming it wasn’t heavily loaded in either the first of the last year).

2) Josh Hamilton: $62M (or $70M). However, it doesn’t look like the Rangers picked up any of Hamilton’s 2015 salary (incidentally, on big deadline deals, the acquiring team almost never picks up any or much of that season’s salary for the player). So the Angels were on the hook for $25.4M this season. Figure he played about 1/3rd of the season with the Rangers (50 games; and Hamilton’s 2015 payroll hit to the Angels was $25.4M), and the Angles total dead money cost is just under $70M.

1) Charlie Weis: $24.7M. The Notre Dame money looks like an initial payment of about $6.6M followed by annual payments of $2.054M. This should come off the books this year making his total in 2015 money about $19.2M. But he is also getting paid by Kansas where he was also terrible at being a head football coach. If Bo Pelini gets a deduction because he’s coaching somewhere else (and it’s a real deduction; that money comes off what Nebraska owes him), then shouldn’t Weis get credit for being able to hoodwink two schools into paying him to not coach? If you add in what the Jayhawks owe Weis, he’s $24.7 in dead money to two schools. That’s great not-work if you can get it.

However, given that there are eleven names on this list with more in dead money to their credit, it seems a little odd that Weis would earn the top spot. I mean sure, it probably generates ESPN way more clicks to put Notre Dame and Charlie Weis on the homepage instead of Gary Matthews, Jr. but move one up the list (to Josh Hamilton) and you’re in for over 2.5x the money and that for a player who is a shell of his 2-seasons-ago self. Weis had some bad seasons in South Bend, but he actually took Notre Dame to two BCS Bowls (and in a fun bit of symmetry got beat so badly in one by LSU that it probably helped JaMarcus Russell, the name on the other end of the list, rocket up to becoming the #1 overall pick in the NFL draft). And because of their lack of conference affiliation, the Irish didn’t have to split those checks with other schools. So if you want to look not just at the cost but also the return, either in terms of wins or dollars, there is no way Weis is the worst of the lot.

Kansas is probably getting (or got) much less for the $5.8M they paid Weis to leave than ND got for the $19M they paid for him to do the same. Plus, Notre Dame covers its administration building in actual gold. They probably found $19M in the couch cushions at the Development offices.

1 Even I half-assed it so that I really only had to write one function to do the calculations. I picked a discount rate of 3% for all years. If you look at inflation, it has been ridiculously low the last 3-4 years. Go back a few more years and it’s a little higher. So I guesstimated something in the middle. For past years, you can go get the CPI and do really accurate calculations of what, say, 2003 money is worth today. I didn’t do that. I stuck with the same 3% going forward and backward, again for simplicity sake. So I wouldn’t take my numbers as gospel, but they are still far more accurate than Rovell’s using nominal dollars.

2 This might be very wrong. Not an NBA guy. But it seems like the sole point of every trade in the NBA is to find expiring contracts and match cap hits such that there has to be a frictional amount of dead money that’s persistently floating around.