It’s German For ‘The Penalty The’

mbertin
Soccer, Stats
No comments yet 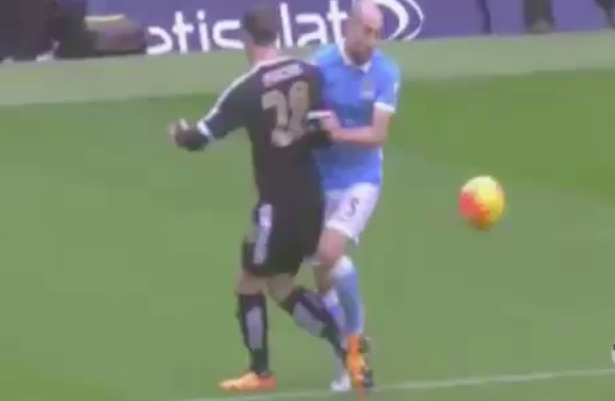 I’ve made the case elsewhere that Premier League officials (in particular) are terrible at their jobs1. Certainly there are multiple missed or incorrect calls all over the place during a match, which is understandable as A) many (most?) infractions are judgement calls to begin with and B) referees are human (maybe). Martin Atkinson isn’t infallible no matter what color cards the FA bestows upon him.

But some calls or non-calls can have a bigger impact on the outcome of a game. Take the City v. Leicester match from a couple of weeks ago. Pablo Zabaleta almost certainly should have been awarded a penalty when he was fouled after his foot had come down on the 18 (literally on the line).

In all likelihood, with the correct call made, it’s 1-1 in the 23rd minute. The rest of the game, by definition, unfolds in a completely different manner. It’s impossible to know precisely what would have happened—City might have lost anyway—but, assuming they convert the penalty, it would have been metaphysically impossible for City to be down 0-2 in the 48th and chasing the game (which is what led to them going down 0-3).

On replay the game commenter noted: “If he [the official] has even 1% of doubt he’s not supposed to give it.” Check the Laws of the game, there is no doubt threshold for when a referee should or should not give a kick. It was clearly a foul, because Anthony Taylor gave a free kick. That decision was even more peculiar, because if Taylor wasn’t in a good enough position to see the foot on the line—and he was in a bad position on the play—how did he clearly see the foul? Issues of fairness or justice which probably lower my own quality of life and enjoyment of the game, that’s pretty much a ‘me’ problem. But there is also a decent mathy way to approach the issue.

Look at this chart. It’s beautiful, for multiple reasons. But for now we’re less concerned with the aesthetics than the actual information. In 1930, there were just under 4 goals per game in England (In Spain it was over that—4.27—and in Italy it was 3.11 goals per game)2. If a ref gave a penalty to one team in 1930, he was accounting for close to 20%3 of the scoring in a game (on average, in England) with one blow of the whistle. That’s not insignificant, but it’s also not insurmountable. Even if you conceded the spot kick, figure that there were three goals left in the game.

Compare that to today. In 2014 there were 2.57 goals per game (again in England). Now a penalty accounts for almost a full third of the scoring in a game. If it’s converted, you’re done as, numerically, there aren’t even enough goals left in the game for you to come back and win4.

So if officials are bad at their jobs, why not deemphasize their ability to have such an enormous say in the outcome? Instead of a penalty kick, send a player off for a finite amount of time, say 15 minutes.

Is that a lot? Figure that all shots go in at just a little under 10%. And if a shot was denied by the foul that resulted in a penalty, then the just-fouled team is still getting over twice as much value with the 15 minute man advantage. But that just-under-10% is the average of all shots. If you pull someone down at the edge of the 6-yard-box then you’ve probably taken away a high quality scoring chance. The kind of chance that justifies a free shot at the keeper from 12 yards out, right?

Eh, pretty much no. The majority of shots that are worth more than the .225 we’d give for a 15 minute man-advantage are within about a six-yard radius of the center of goal. In fact to get a shot that’s worth as much as a penalty is currently, you practically have to be standing inside the goal already. Okay, that’s an exaggeration, but single shots worth .78 occur at almost point blank range.

It’s far more just or fair or whatever to penalize a team .225 goals for potentially denying .1 goals that it is to penalize them .78 goals for the same infraction.

A sin-bin might even alter the game in interesting ways that actually make it more compelling. Freed from the shackles of knowing that one whistle will go a long way toward deciding the game, officials might call more fouls in the box5. Rampant bear-hugging on a corner? Maybe two defenders get sent off on the same play6. Now you’re 11 v 9. John Terry turns his back while jumping to block a ball and just happens to throw his arms out wide, only for the ball miraculously to deflect off his elbow? Jonathan Moss no longer has to pretend that’s a natural position (really, I would go so far as advocating John Terry not leave the Prem just to see how many times in a season he would actually end up in the soccer equivalent of hockey’s penalty box). Teams that are outclassed but sit deep to defend, they probably run slightly greater risk of playing a man down as the number of calls against them will almost certainly go up. Strategic use of substitutions probably becomes more interesting depending on the game state and the remaining time.

Look, until Skynet rolls out the first ref-bot, we’re at the mercy of imperfect humans7. So the least we could do is de-emphasize how far one of their screw ups—or even just one of their possibly incorrect ‘soft’ calls—goes to determining the game’s outcome. Penalties in particular give a disproportionate reward relative to the actual cost of the infraction. Time to get rid of them8.

1 But I’ve qualified that with the belief that their jobs are also near impossible.

2 If you go 5 years back, the numbers are within a similar range +/- about .2 goals a game. You can’t go back past 1925 though because the rules were different. Prior to that season there had to be three defensive players between the last attacking player and goal when a ball was played for it to be onside. It was then changed to the two defenders currently still used for offsides. This is its own kind of funny in that, scoring was so low in the mid-1920s that they bothered to change the rules. But scoring in the years immediately before the change was pretty much what it is now.

3 Penalties are converted right around 78% of the time; so .78/3.95 = .197. Just a touch under 20%. Also worth noting that back in the day, a win was only worth 2 points, so you were less likely to be gifting titles by erroneously giving the odd penalty here or there.

4 Again, on average. We’re mostly talking in terms of ‘on average’ unless otherwise specified. But, yes, there are probabilities and distributions and obviously teams come back to win after giving up a penalty. But here 2.5 – 1 (for the converted penalty) = 1.5. Because goals are discrete technically there is the Schroedinger goal still out there to be claimed by one side half of the time. But yeah, just giving the kick is about 30.3%; a converted kick takes it close to 40% (38.9%).

5 That might seem counterintuitive to de-emphasize the officials by giving them incentive to call more fouls that would result in a man advantage, but there is already so much inconsistency on infractions in the box. My guess? Officials are all too aware how much a penalty can impact the outcome so they err on the side of caution. The result is seemingly large variance for both not whistling events that are fouls, and giving penalties for things that aren’t fouls. Hopefully without the penalty kick, there is more consistency and fairness, even if the by-product is more overall whistles.

6 Although I can totally foresee a situation that ends up being similar to that in the NFL whenever two players fight they call offsetting personal fouls such that, effectively, there is no penalty on either team. The difference here is that calling fouls on both players would lead to both being sent off. Ten v. ten for 15 minutes would mean more space for both sides, as well as potential tactical/formation adjustments depending on who got sent off.

7 If you want to argue that it’s the players committing fouls, and not the officials, that are determining these things; I’d be more on board with that if refs were any good. Or even consistent. But there is no consistency from ref-to-ref or from game-to-game. If that weren’t the case then the color-commenter’s fallback of “I’ve seen them given for less,” wouldn’t exist. Officials aren’t even consistent within the same game. There are academic papers to back that up. Look, nobody has any idea what is or isn’t a handball anymore. So why are we still over-weighting them when it comes to determining games?

8 Without having thought through all the scenarios, I’m leaning toward complete abolition. If the infraction is something like the Suarez handball against Ghana in the World Cup, just give the goal. If the shot is clearly within the frame, and the player uses his hand to stop it, just give the goal. They have goal-tending in basketball, where a basket can be credited without it actually being scored, so there is precedent in other sports. Otherwise, you’re basically rewarding the defense for a blatant transgression of the rules. If it’s something like the last man back denying a clear goal-scoring opportunity, then a PK might make sense. Even then I’d advocate a rule change away from the PK and red card to giving the just-fouled team the option of either taking a PK or having the fouling player given a red. If it’s the 2nd minute, you’d probably take the red (that’s worth 1.34 goals); in the 88th the penalty (worth .78 goals).