Chicago Fire: The Need for (More than Just) Speed

mbertin
Numbers and stuff, Soccer, Stats, Uncategorized
No comments yet 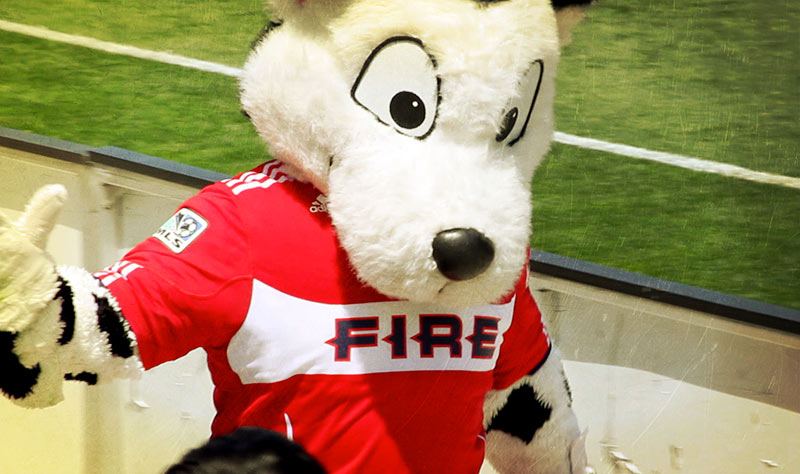 To this point in the season, the Chicago Fire have played more minutes against 10 men than any other team in MLS1. And it’s probably not luck.

The Fire can run out a front line that, oh, challenges the positional awareness of MLS defenses. David Accam is fast, like very. Quincy Amarikwa and Joevin Jones are both speedy. And Harry Shipp is plenty quick himself. That’s not a euphemism for white (although Shipp is white). He’s got enough fast-twitch quickness that he can create a little space for himself when tightly marked, but his straightline speed is nowhere near that of Accam.

Through seven games the Fire are 3-0-4 and, on nine points, currently occupy the last playoff spot in the East. That’s largely meaningless because it’s so obscenely early in the season. But after setting a league record for draws in a season last year (18), Frank Yallop is likely happy to be picking up points in increments of three.

There are probably some numbers to illustrate the point (and some are coming) but, just watching the Fire, they look way better this season. On the back of a handful of key personnel changes, they might even get better as players become more familiar with each other (and if Shaun Maloney simply starts playing decent). Still, the biggest change is the increase in speed. And most of that is down to Accam (Shipp and Amarikwa were roster players last season).

Using speed is hardly revolutionary. Even if the fastest guy isn’t actively involved in any given play, his movement off the ball can put pressure on defenders and open up space in other parts of the pitch. When you have it in spades it becomes lethal (see: LFC 2013-2014). Moreover the threat to get behind the defense is omnipresent, and when it actually happens it causes problems. That’s how the Fire ended up enjoying a man advantage against NYC for 71 minutes.

But in a league where, collectively, the quality of defenders can generously be described as ‘marginal’ the effects of pace are only magnified, particularly when it comes to inducing red cards. In fact the overall team speed is responsible for almost all the man-advantage minutes that the Fire have enjoyed. And all three of the team’s wins (all by a single goal) are in games where they’ve played against 10 men. Now, in two of the three wins, the winning goal was actually scored before they went up a man, but even if you’re just defending a lead, it’s probably preferable to have more men on the pitch.

To this point in the season, it would seem that speed isn’t just an attribute for the Fire but it’s an actual tactic:

Things might have been even better for the Fire had Accam been fit the first two-and-a-half games (he made his debut after halftime of the team’s third game, away at San Jose). Since Accam’s introduction, the average distance from goal of Fire shots has decreased by 8% (i.e. they are getting shots from closer in), and their finishing rate has almost doubled (increased by 99.99%). Accam’s speed has simply made the Fire better, right?

Okay, those stats are intentionally misleading. The percentage increases look sizable (and needing half the shots per goal is definitely better), but the raw numbers for the Fire are still pretty poor. Even their ‘improved’ post-Accam average shot distance would still only put the Fire at 13th (out of 20…. so third quartile), and their finishing rate of 0.0714 would only be good for 15th. Their overall rate of .0612 has them at 17th (aesthetically janky R screens of the rankings for shot distance and goal/shot are here and here respectively).

Basically, the Fire don’t take particularly good shots and they are not particularly lethal finishers (those two are probably related). If they’re a man up, it helps them overcome that. If not, well… they are winless in games where the opposition hasn’t picked up a red card.

Setting up to play Chicago should then be pretty obvious: sit deep and let them take low percentage shots. If you wait to counter, the most utility they’ll get from their biggest asset is his tracking back to try to stop you. Don’t let them get behind you, and everything should be okay.

It’s only seven games in, and all the wonderful things about speed—you can’t coach speed, speed doesn’t go into a slump, speed doesn’t take a game off, etc.—still apply. But without some additional skills (and ‘playing against 10 men’ isn’t really a skill), it’s only going to be so effective. Even in MLS.


1 Maybe. They are actually in pretty much a dead heat with the Seattle Sounders for total minutes played against 10 men. The 1-2 order depends on how many seconds of stoppage time were played in the last minute of their respective games (I just have the minute the game ended).